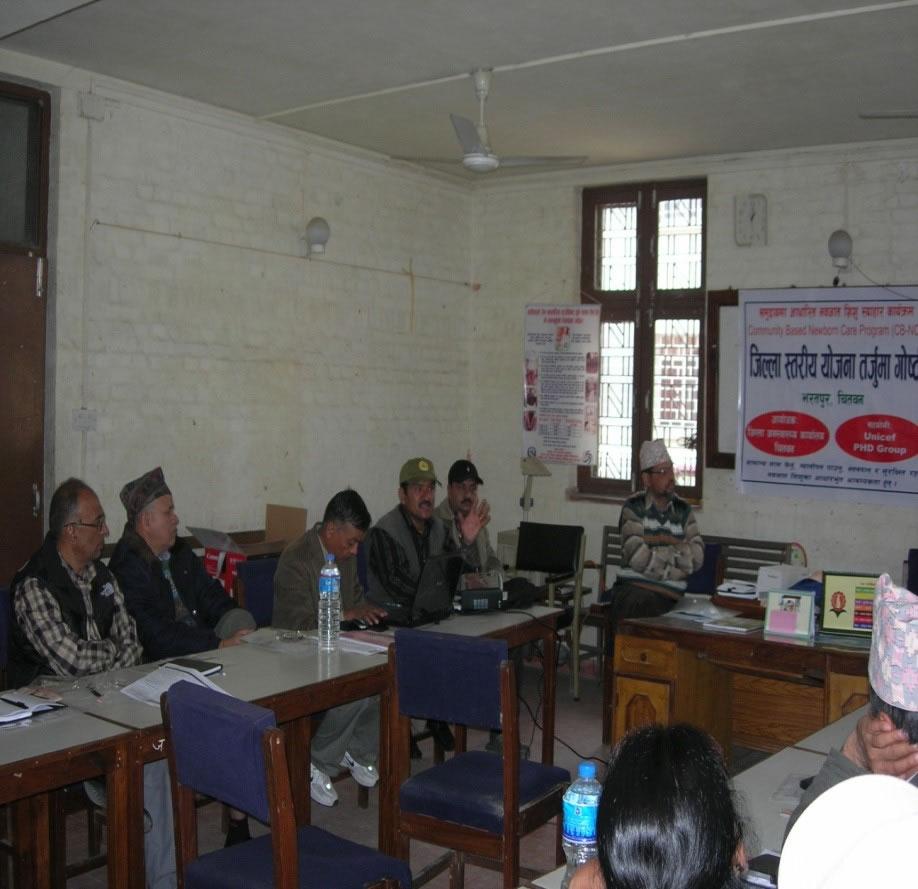 PHD Group extended technical support for community health project implementation, project strategy formulation and advisory services. It has also been involved in conducting pilot test for new project and the adaptation and dissemination in rural communities. During the project period, PHD Group provided technical assistance to Child Health Division (CHD)/Department of Health Services (DoHS) of the Ministry of Health and Population (MoHP) for implementing Community Based New-born Care Programme (CB-NCP) in Chitwan district with financial support from UNICEF/Nepal. It coordinated with the CHD in Kathmandu and District Public Health Office (DPHO) in Chitwan.

PHD Group implemented the CB-NCP project smoothly since it began in October 2009.In its early phase CB-NCP provided training to district as well as below district level health service providers. The goal of this project was to improve the health and survival of new-born babies in Chitwan district. The major interventions included:

The success of the CB-NCP was internationally disseminated through a research article by presenting its findings at the 13th International Conference organized by the International Union for the Scientific Study of Population (IUSSP) on 29th August 2013 in  Busan, South Korea. The abstract of the presented article is numbered 180 in the Book of Abstracts XXVI IUSSP International Population Conference, 26-31 August 2013, Busan, Korea.

Neonatal mortality rate (NNR) has declined slowly in Nepal. Between 2001 and 2011, post-neonatal (PNN) mortality fell by 50% (26 to 13), whereas the neonatal mortality was reduced by only 15% (39 to 33). During the last 5-year period (2006-2010) NNR didn’t decline while PNN declined by 13%. Hence, an increasing proportion of child deaths are in the neonatal period; 61% of all deaths in children under 5 took place in the neonatal period. Nepal Government with technical and financial support from the private sector, NGOs and External Development Partners has attempted to reduce NNR by piloting CB-NCP in 10 districts in 2009 and 2010. Analysis of Nepal Demographic and Health Survey (NDHS) 2011 data shows that Community-Based New-born Care Program (CB-NCP) has worked as the new-born care practices have improved and NNR in intervention areas is about half (20 per 1000 live births) the level than that of the remaining areas (39) of Nepal although nationally no decline was observed in 2011 compared to 2006 (33).

Source: “The Impact of Health Intervention and Programs on Mortality – A Case of Early Age Mortality in Nepal”

PHD GROUP is one of the first non-government, non-profit research organization founded in 1971 and registered as a Company not Distributing Profit to articulate Nepalese aspirations in the development process of Nepal.